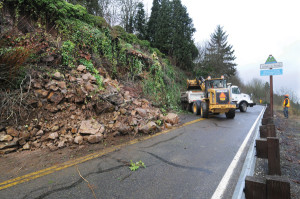 Landslides occur in all U.S. states and territories. In a landslide, masses of rock, earth, or debris move down a slope. Landslides may be small or large, slow or rapid. They are activated by storms, earthquakes, volcanic eruptions, fires, and human modification of land.

Debris and mud flows are rivers of rock, earth, and other debris saturated with water. They develop when water rapidly accumulates in the ground, during heavy rainfall or rapid snow melt, changing the earth into a flowing river of mud or “slurry.” They flow can rapidly, striking with little or no warning at avalanche speeds. They also can travel several miles from their source, growing in size as they pick up trees, boulders, cars, and other materials.

Protective Measures Before a Landslide or Debris Flow

The following are steps you can take to protect yourself from the effects of a landslide or debris flow:

During a Landslide or Debris Flow

The following are guidelines for what you should do if a landslide or debris flow occurs:

After a Landslide or Debris Flow

News about Cape Meares, Oregon and the CMCA community association.